How to Fix Leaky Pipes

How to Fix Leaky Pipes

We all have leaky pipes at one time or another in our lifetimes.  And while this subject appears to be general in nature, it’s actually more specific than you might think.  Note that the vast majority of water supply line piping in homes now is made out of copper.

If you find one of your water supply line pipes leaking, the first thing you will want to do is to attempt to stop the leak until you can have the pipe permanently repaired or replaced. And hopefully, the leaking pipe in question is exposed where you have access to it, like under a sink or up in your basement ceiling for instance.  If not, you may have to do a little work to uncover the pipe, such as removing a section of drywall or plaster, or even a section of floor or ceiling.

Before you start or attempt to fix the leak, shut off the water valve to the specific pipe that’s leaking.  Then turn on the affected faucet(s) to drain the water that is left in that particular line/pipe.

Wipe the pipe dry with a towel or cloth.  Allow it to air dry completely before continuing further.

Then use a putty knife to apply epoxy to the area that was leaking.

Cover the leak with rubber.  A section of a radiator hose will do; you’ll have to “slit” it on the side so that it can be wrapped around the leaking pipe.  Make sure to use a piece of rubber that is a long enough section to cover the originally leaking area of the pipe plus some. And that is also wide enough to wrap around the affected area of the pipe. But without overlapping itself.

Then use two clamps (similar to radiator hose clamps) to clamp the rubber section onto the pipe. 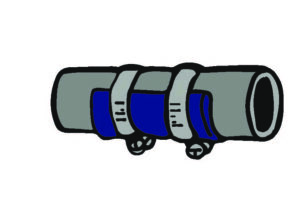 Make sure to check that the leaking pinhole is completely covered before continuing. Then, tighten the clamps down onto the rubber and allow it to set for at least an hour. Use water resistant tape to cover the rubber after allowing the epoxy underneath to dry for a period of time.  This will serve as double protection. Turn the water valve back on to make sure there is no leaking.

Another way (perhaps a bit better) to stop the leak is similar.  Using a rubber pad again (after applying the epoxy as described above) and two semi-circular pipe plate sections, bolt them together around the pipe as shown in the picture below.  The concept is the same as that previously described, but would require a little more space around the leaking pipe for access.  It just uses a different method for clamping.  This method seems to provide a little bit more positive clamping action, and may even be considered permanent if the pipe is otherwise sound.

The clamps and rubber pad with hardware can be purchased at any Home Depot, Lowe’s or hardware store. 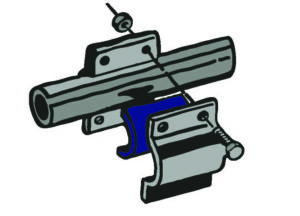 Another relatively easy temporary measure for stopping very small pipe leaks is to simply wrap the waterproof tape over the leaking spot without any rubber pad.  Again, before doing this, make sure the water is shut off. And that the pipe section is clean as prescribed above.  And when using the waterproof tape, be sure to dry the pipe thoroughly before you start wrapping.  Start the tape about 2 to 3 inches from the hole and extend it the same distance beyond in the other direction covering the entire affected area.  Although this method is easier and might be a quicker fix than the two methods described above, it most likely will not be a permanent fix, or in some cases may not even work at all.

Other Alternatives to Fix Leaky Pipes

Other alternatives might include rubbing the leaking “hole” with a stick of special compound. Or by just applying the epoxy paste for those tiny leaks in pipes.

This compound stick is available at most hardware stores (or you can go to the link just below).  Simply rubbing the stick over the hole that was leaking and applying epoxy should stop the leak, at least temporarily.  Again, please make sure that using the compound stick or applying epoxy paste is done only on dry pipes. And with the water turned off.

Of course, the problem with all of these solutions is that a pipe that’s bad enough to spring one leak often starts leaking in other places too.  You may fix one spot only to see the pipe develop a pinhole leak somewhere else.  This is especially true in cases where the leak in older pipes results from corrosion; the whole section of pipe will probably need to be replaced.  And chances are you’ll want your leaky pipe to be permanently fixed.

Or, You Can Just Call Proudfoot Services

Unless you are very handy and are knowledgeable in how to cut, clean and solder copper piping, this is typically a job for a professional plumber like Proudfoot Plumbing, Heating and Air.  Give us a call at 412 461 2198 or contact us.  We can help to assess your problem and come up with the most cost-effective solution for you.

At Proudfoot Plumbing, Heating, and Air we are here to help you and are happy to process your scheduling request by email if that is your preference.  Please indicate what service area you are in need of your request and we will get back to you within one business day of receiving your request.

Proudfoot Plumbing Heating Air is a family-owned and operated business that takes pride in our customer service and attention to detail.